5 AW14 Outerwear Trends To Experiment With

5 AW14 Outerwear Trends To Experiment With

With a brisk chill in the air, darkened skies by 4pm and flurries of people huddling around department store radiators for warmth; finger-less gloves in tow so they can still Tweet complaints about the cold in tow. When these conditions start to surface, you know that the season of hot chocolates, snowflake motifs and most of all (and lets face it, most importantly of all) coats have arrived. Gentleman, the Autumn/Winter period is upon us.

Updating your wardrobe can be quite the arduous task, going from one extreme of breezy linen short suits and cotton shirts to heavy-duty tweed three pieces and woolen overcoats is very daunting. Especially when you live in England of all places, when it is a sunny and crisp one day, only for the day after to be a deluge of rain and bad spirits. What is a man to do?

The key to transitioning between the two halves of the fashion calendar lies in the coat. The coat is a ubiquitously versatile garment. Shrouding the core of the outfit underneath, it can easily make, or break, an ensemble. Swapping your lightweight coat for something a little more durable isn’t as easy as you’d think. With so many different styles of coat – all better suited to different occasions – choosing that piece of outwear to be your new go-to linen blazer can be hard, but when you start to break down both this seasons’ current trends and the timeless aesthetics of menswear, choosing a coat (or two) isn’t as hard as you think… 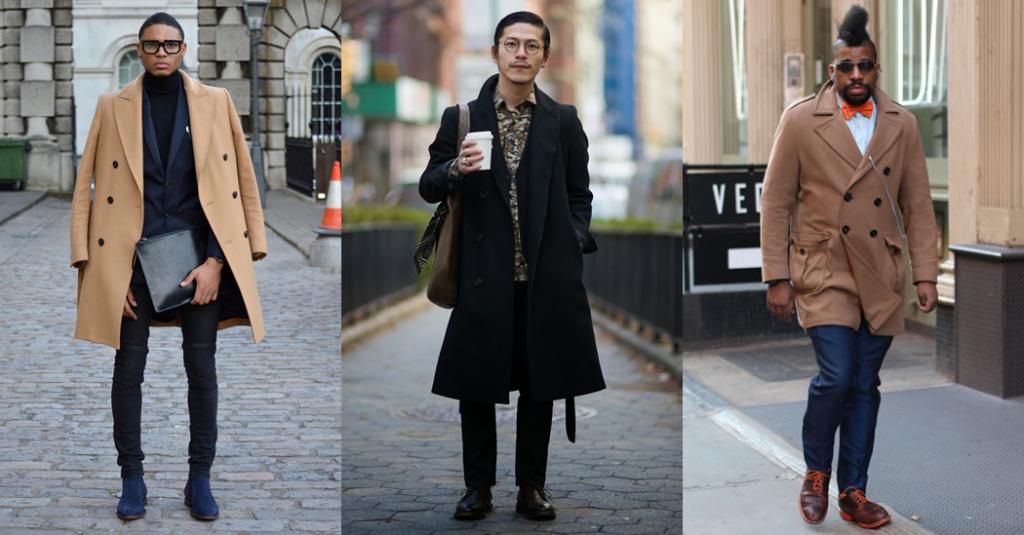 If there’s one style that has made it into the subtle forefront of the recent decade, that is the double breasted coat. Military has seen a radically fast resurgence, the aesthetic been de-constructed by designers to piece together trends ranging from woodlander camouflage, to distressed, chunky boots. One chunk of the military structure was the double-breasted coat.

With a flair of the 40s imbued within it, the double breasted coat is the cornerstone of elegance. Easily flowing into formality, but just as easily crashing into more contemporary, youthful outfits. A tidy double breasted coat will lead your Autumn/Winter fashion parade, and when choosing one (preferable one whose cut finished just an inch above the knee) keep he colour reserved. A classic arrangement of black, grey, navel and camel are timeless options.

Yet, do not be afraid to experiment with tone this season, burgundy, olive and scarlet, even pattern, are all within scope. Especially as you’ll be hanging up your dramatic piece when you enter the office. Burberry Prorsum encapsulated this freedom of design by architecting double-breasted coats in both traditional, and forward fashions for their London Collections: Men AW14 collection. They can be worn over a three-piece suit or even just a simple cable-knit jumper. Do not be afraid to wear a double breasted coat in a casual setting. It is typically a smarter example of outwear, but if worn correctly, it can be transferred to looser outfits, too.

Other suitable colours are khaki, which provides a tilt towards the coats’ military routes, and camel, which conjured the image of the hard-working businessman of the 40s. 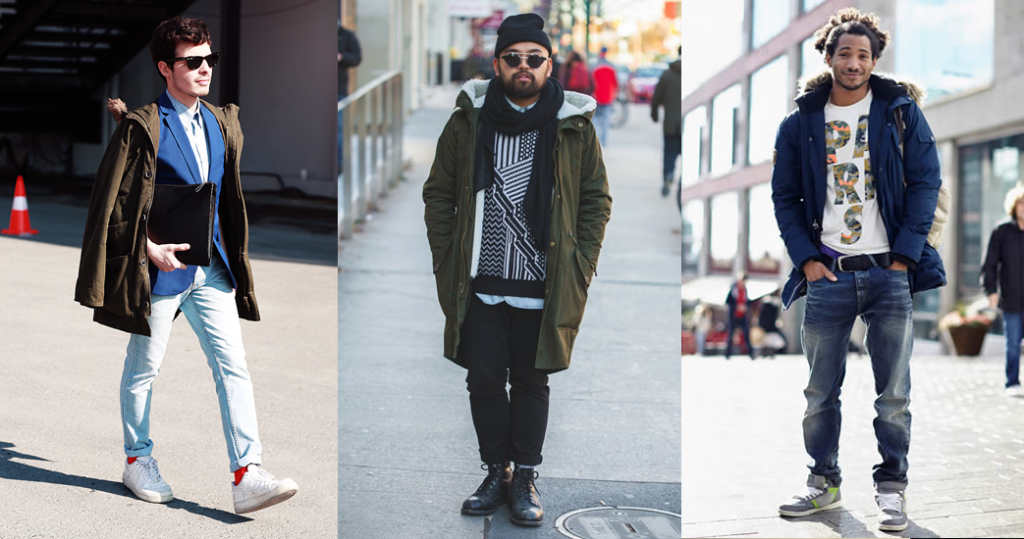 Following the satorialists’ dream that is the double breasted coat, comes the casual, weekend substitute, the parka. When the weekend floats by with dreamlike rapidity (a little too quick, for that matter) it’s time to loosen the neck tie, strip off those overwon trousers, and don that parka coat.

Calvin Klein’s AW14 collection heavily featured the parka jacket, coming in a tray of dusty beiges and browns, the tanned and charred pieces worn tonally and casually. The parka is remarkably versatile, it can be worn over a suit to create a powerfully simple contrast, or worn just over a sweatshirt for an urban, streetwear look. Alternatively, the parka’s Britpop heritage can be embraced by pairing it with a check shirt and dark denim jeans.

When choosing a parka, the parka’s more unstructured and rugged image leaves plenty of room for a wider range of hues. Burgundy, olive and navy will help add an leafy, autumnal touch to an outfit made for a quick pint with friends, whereas darker shades of navy, black or grey would be best kept with semi-formal outfits. In other words, the parka looks good in practically any colour. 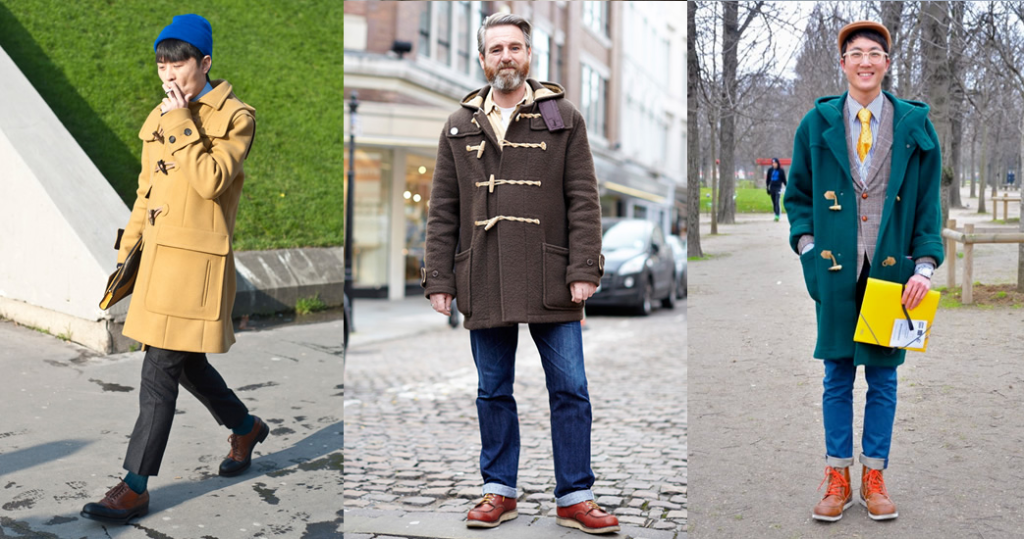 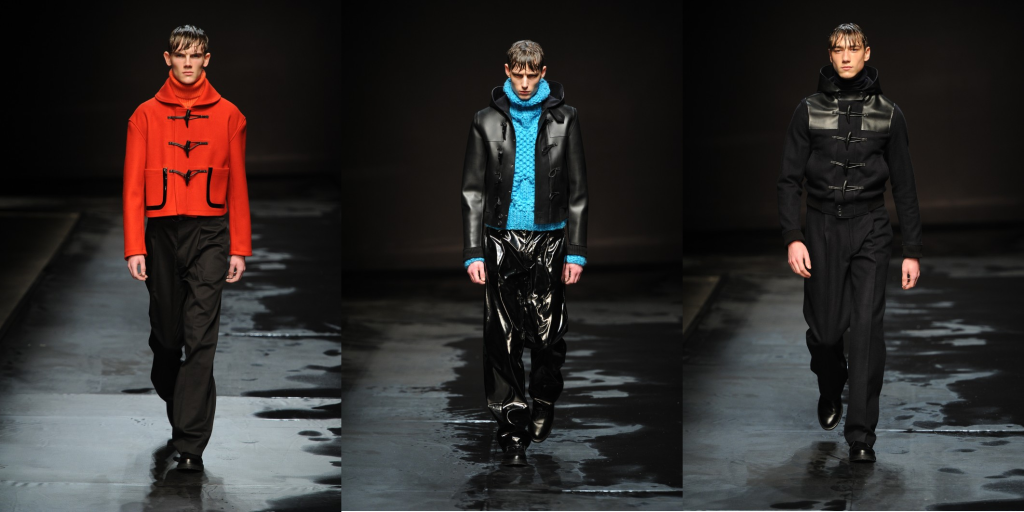 Washed up on the shores of the classic nautical trend is the duffle coat. Known for its functionally fetching toggle system – used instead of buttons –  and rain-battling hood, this hardy coat can be worn best with chunky knitwear, a la Topman’s AW14 collection at London Collections: Men. Inky, leather paneled duffles were paired with equally sombre hues, but also bright flashes of neon as the deluge of the elements pittered down on the jet-back runway. The vivid orange duffle showcased how the duffle’s fisherman routes can be taken out of the usual restrained colours of navy and black.

Wear duffle coats with slim, cuffed jeans and slip on brogues with a cable-knit jumper to channel the duffle brightest facets; its formality, but also oceanic edge. 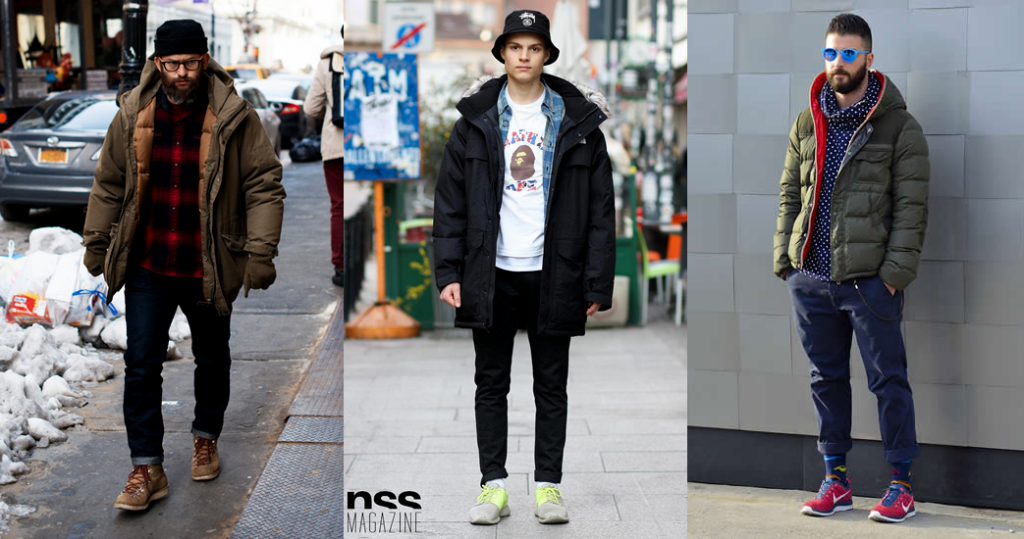 Formal supremacists, don’t run and flee. The puffer jacket might cause a lot of style-conscious men to shudder, but the puffer jacket has seen a radically suave revival in recent seasons.

Pretty much only comparable to wrapping up a pillow around you, the puffer jacket will be your feathered savior on icier days. A thicker coat will eliminate any frosty fingertips and undershirt breezes, and due to the outdoorsy, casual nature, any colour is suitable for the puffer. Pick a demure hue for more structured affairs, and a brighter shade for those spontaneous winter walks.

Louis Vuitton’s Pre-Fall collection paired puffer jackets of differing styles with smarter pieces; there really are never any boundaries when it comes to coats. 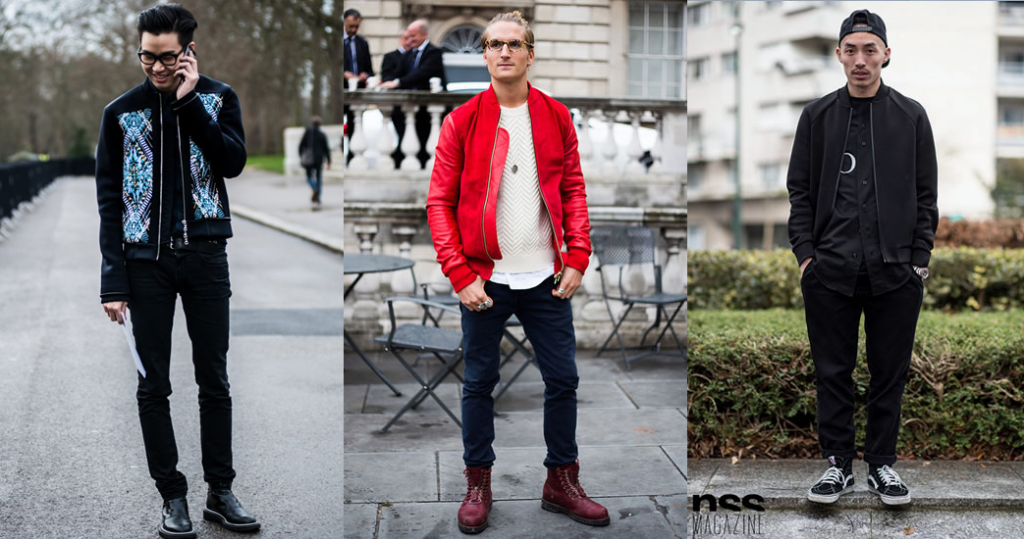 Bomber jackets have exploded on the fashion scene, with varying designs and silhouettes falling into both designer runways and high-street stores. The bomber jacket is an extremely broad family of many other jackets, from motrocycle to harrington, aviator to letterman. For the colder months, keep the bomber jacket of a heavier materiel, such as suede or wool, to keep you warm.

Luxe leather was a motif in Reiss’ AW14 collection, with minimalist architecture and similarly effortless outfits, keeping the entire look tonal. Tonal assembles have been a major trend for this season, the focus being on the make of the clothes itself, rather than a particularity outlandish or striking feature.

Autumn and Winter are cold, freezing and often fraught with rain, but they are the perfect vantage point for really shaking up your style. There is an incredibly wide range of coats available on both the high-street and higher-end stores, all curating their own unique twist to the traditions.

This season is very much centered on taking the modern gent outside of his comfort zone and adopting experimental looks. In conjunction, a counter trend of simple, elegant clothing is taking place. A coat can make the final finishing touch to an outfit.

Outlandish or simple, which would you choose?