It all started in 2001. On a typical episode of ITV1’s This Morning, a 21-year-old David James Gandy won a competition that saw him being offered a modeling contract with Select Model Management. The men’s fashion world pretty much changed that day. He went on to establish a world renowned career as a fashion iconoclast who embodies all that the modern gentlemen should be. All you have to do is Google his name and you’ll see an endless list of fashion shoots, runway walks and street style photographs that make up his CV.

Not exactly the typical Essex man, Gandy was thrown into the high fashion world when he became the leading man of Dolce & Gabbana’s ‘Light Blue’ Fragrance in 2006. The 50-ft billboard probably helped here, but Gandy became known. Known as being the shirtless man who overly dramatically emerges out of the well, light blue water. David quickly became the living embodiment of the iconic brand; culminating with a 280-page photographic book chronicling the legacy of Dolce & Gabbana and David Gandy’s style.

With accreditations ranging from high-street labels Marks & Spencers, Zara, Banana Republic, to more luxurious brands such as Hugo Boss, Gant and Thom Sweeny. Even having his rugged face grace the glossy magazine covers GQ or Attitude. Gandy was emerging as the most wanted man in fashion.

David Gandy’s Style at Its Best 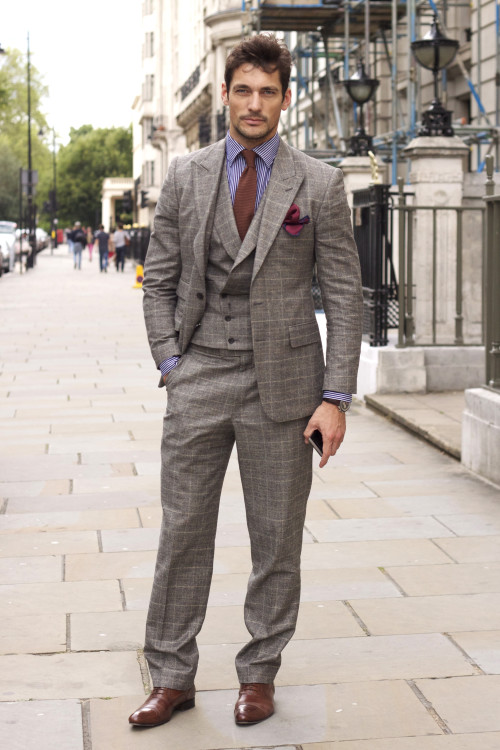 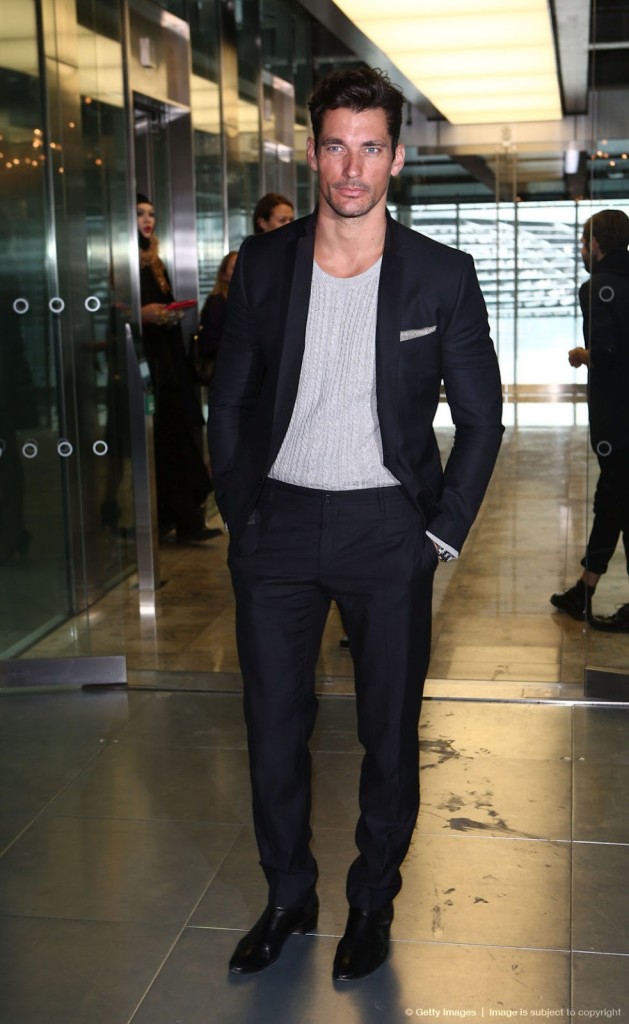 But he isn’t just a model of clothes, a doll for the hands of designers. Being voted one of the best-dressed men in the UK by GQ in 2013, David has clearly learned a thing or two during his career. Having a simple style, he more than often opts for subdued looks that do nothing but please the sartorialist’s eyes. 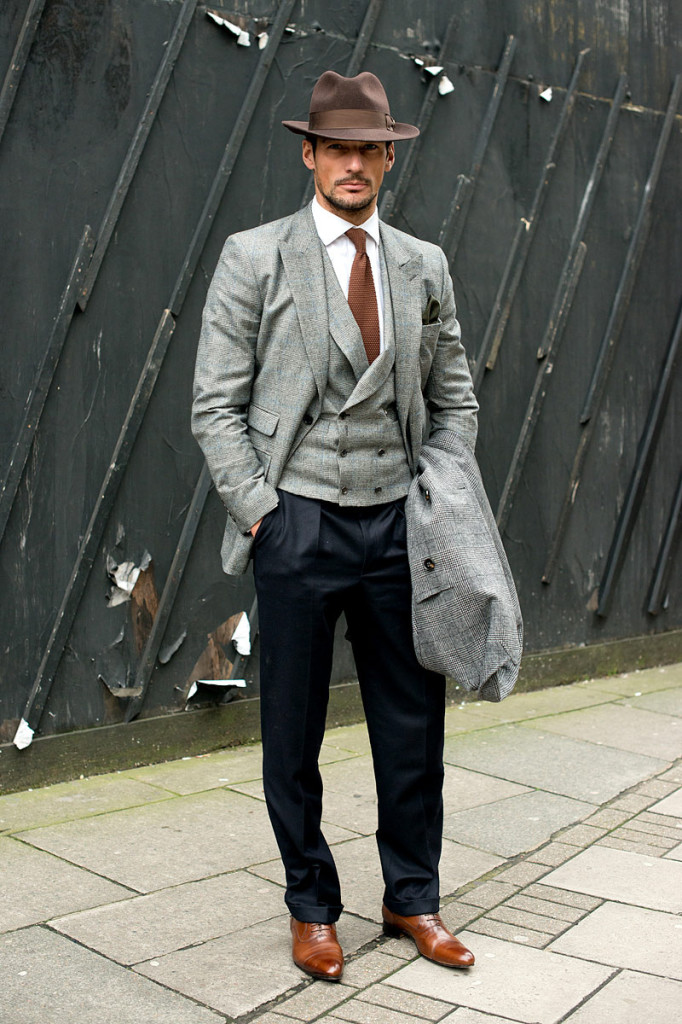 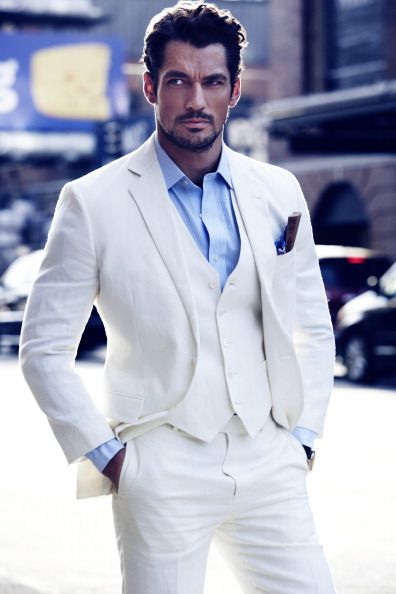 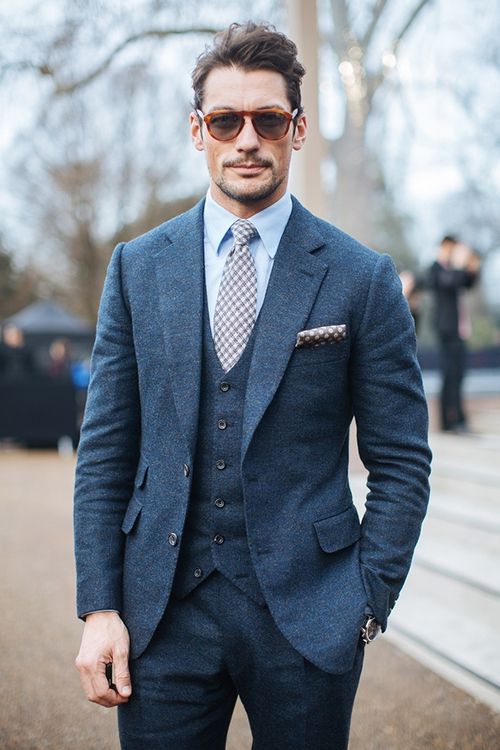 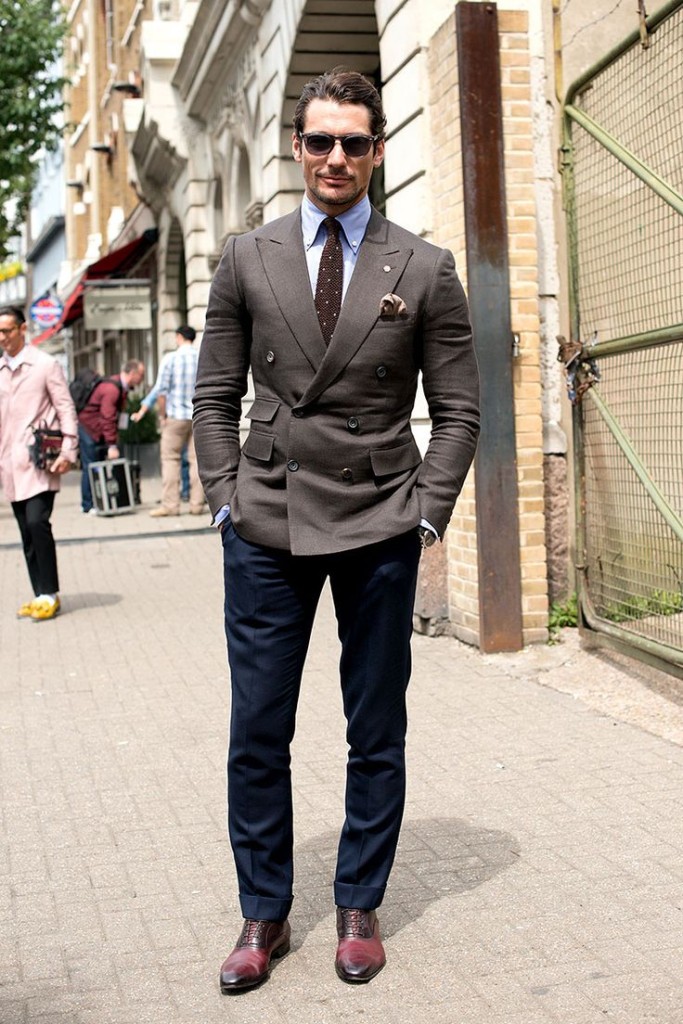 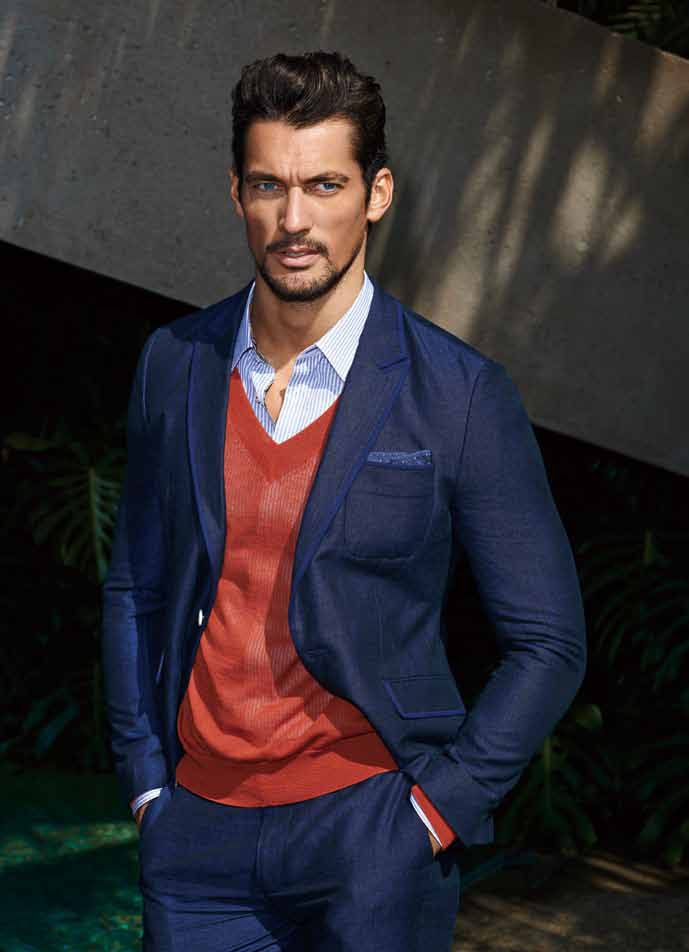 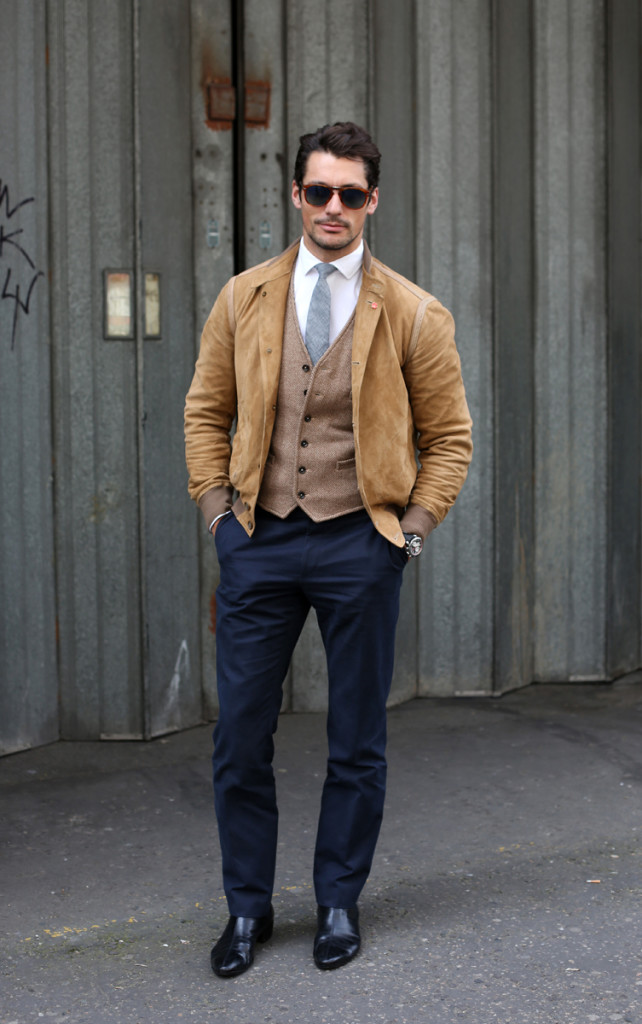 He’s the man who never appears as anything but immaculate. David Gandy’s personal style is very masculine with a minimal edge, typically, he dons tailored suits worthy of the 50s with ballooning, wide-legged trousers of earthly, dark tones. The focus of his looks, whether casual or formal, is on the fit. The blazer never too loose, the shirt never baggy. A  three-piece suit is one of Gandy’s go to looks, the complimenting shirt being crisp and classic. In other words, when it comes to formality, timeless elegance sums up his approach. 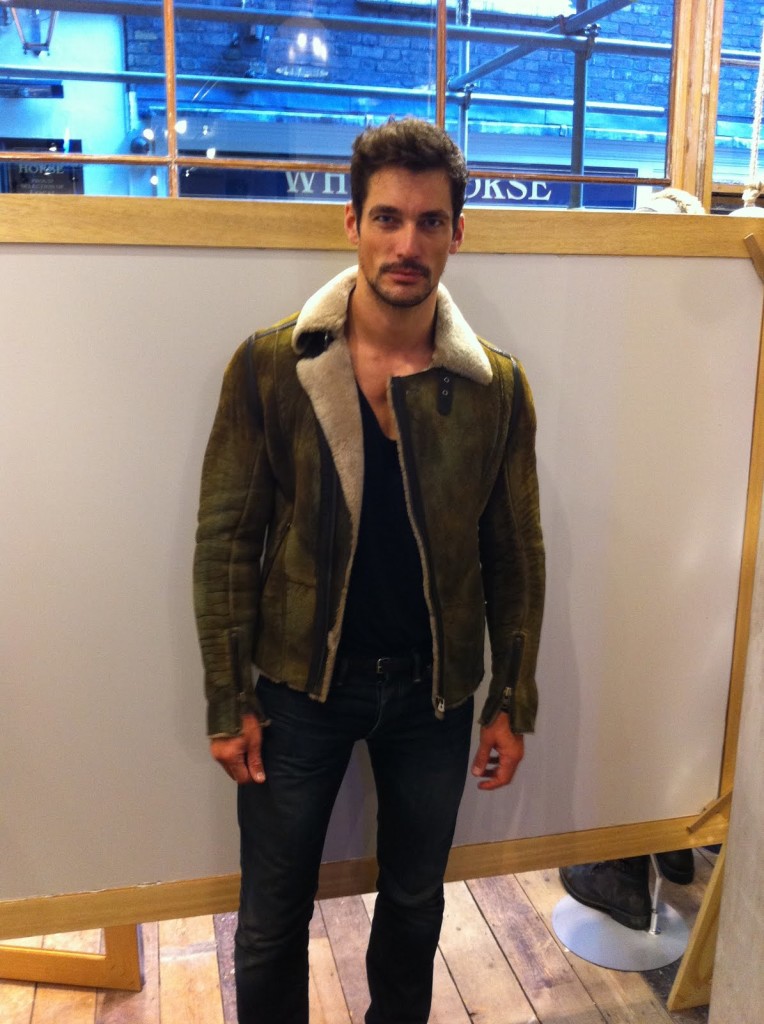 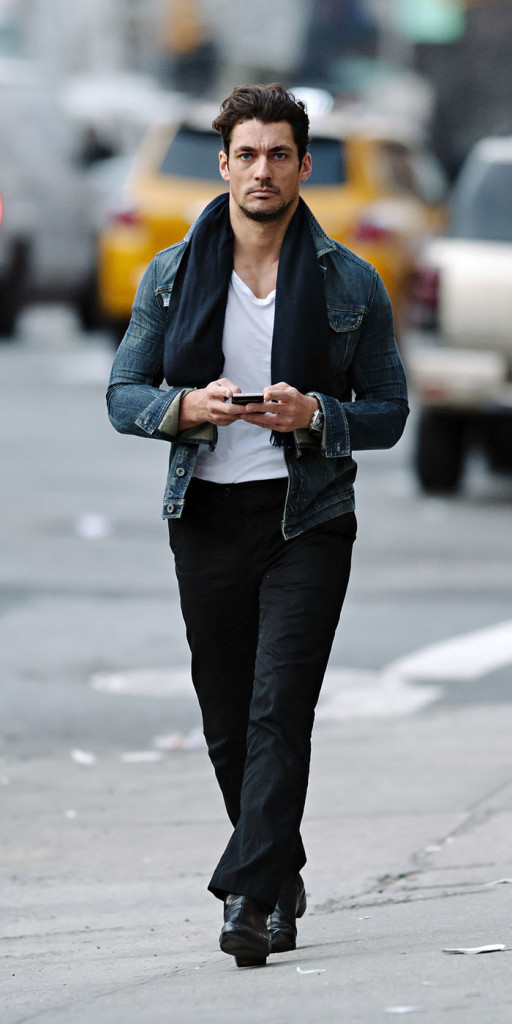 Even when dressing down, David Gandy never strays too far away from tailoring. He remains neutral, wearing plain t-shirts and fitted denim/shearling jackets, but still retains that rugged air. The outfit has that sprezzatura effect; they’re carefully put together but look like they were just thrown on. That is the key to curating his wardrobe. The fusion of traditionally masculine pieces – denim, shearling, tweed – makes for unlimited combinations.

The way David dresses shows that you don’t need to be flamboyant and outrageous to be stylish; effortless basics can make a wardrobe. He’s a true model (literally) of men’s style and is the go-to guy for raw British inspiration. True, he could wear a bin bag with Crocs and still be considered stylish, but David James Gandy – ever since that fateful day in 2001 – has changed the face of menswear for good.