“This is a game changer.” says BMW i Brand Manager Peter Adams. You’re not reading a review on the long dreamt by Apple enthusiasts iCar, this is for one of the latest and possibly most innovative of BMW’s models, the BMW i3. Part of the “Project i” series, the car seeks to revolutionize the musty, archetyped land of the electric car with a fresh and clean dynamic. 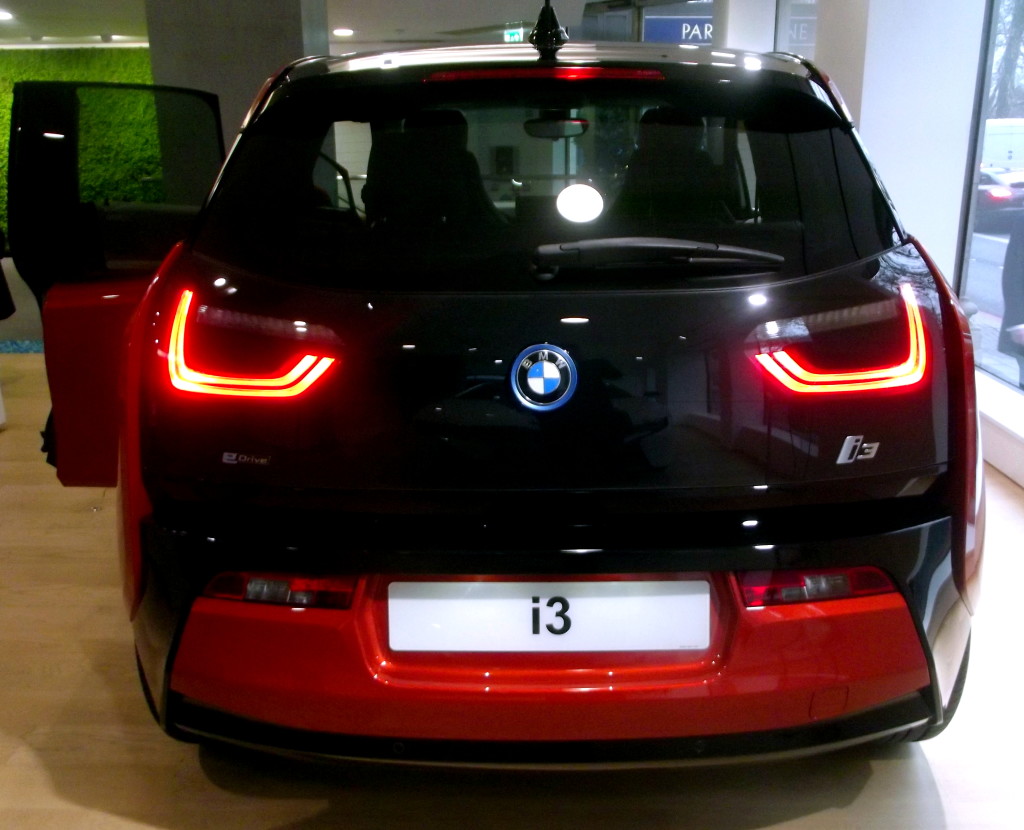 One of the first things you notice about the car is its beauty. It features a very striking appearance, playing on avant garde, untraditional aesthetics. BMW have clearly started from a blank canvas, breaking away from what a car should look like and envisaging a modern design. The High-gloss black element evokes the electric vehicle’s (EV) dynamic and edgy look, the dramatic element running across the car’s bonnet, roof and rear. Accentuating the futuristic details are the U-shaped LED taillights sitting well on the black tailgates. The appearance of the car is nearly as important as the specs, and the i3 just looks amazing. 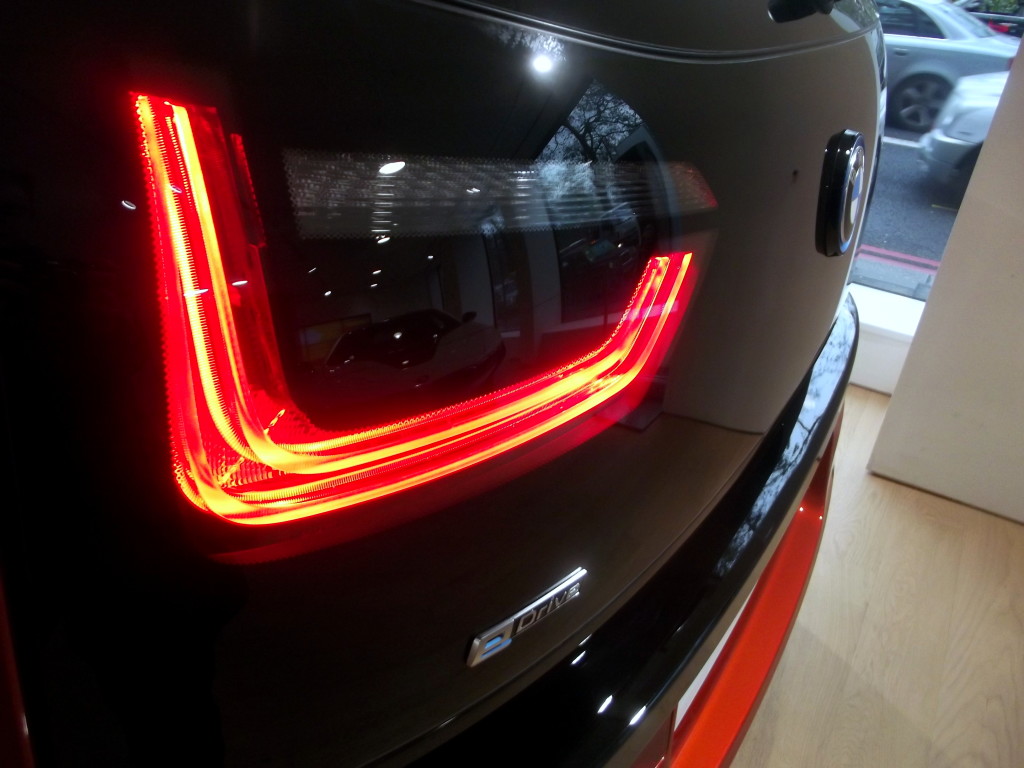 The goal of the materials is keeping the car’s weight at a minimum. With an aluminium chassis, bolts and screws, carbon fiber reinforced plastic door stills and even honeycomb structured windscreen wipers, this has been achieved. It’s kerb weight is a mere 1,270kg. All the materials used are made to be sustainable, the car can be easily recycled if disposed of.

The i3 is surprisingly spacious. Anyone’s initial reaction would be to think of it as cramped, but it has a center tunnel instead of your typical B-pillar doors. You can very easily slip in and out of the car or even between the comfortable seats. Making the raw awkwardness of changing drivers a breeze. Getting in the car, it looks like a Hobbycraft exploded. From leather to eucalyptus wood, the cabin is overloaded with materials. You can choose from 4 ‘Interior Worlds’ as the brochure explains. Each conveys a sense of modernity, with clean lines and finishes. It’s all about the details. Obviously, these have no effect on the BMW i3’s performance, it just depends whether or not you want the glory of being able to say there’s naturally tanned leather upholstery in your car. 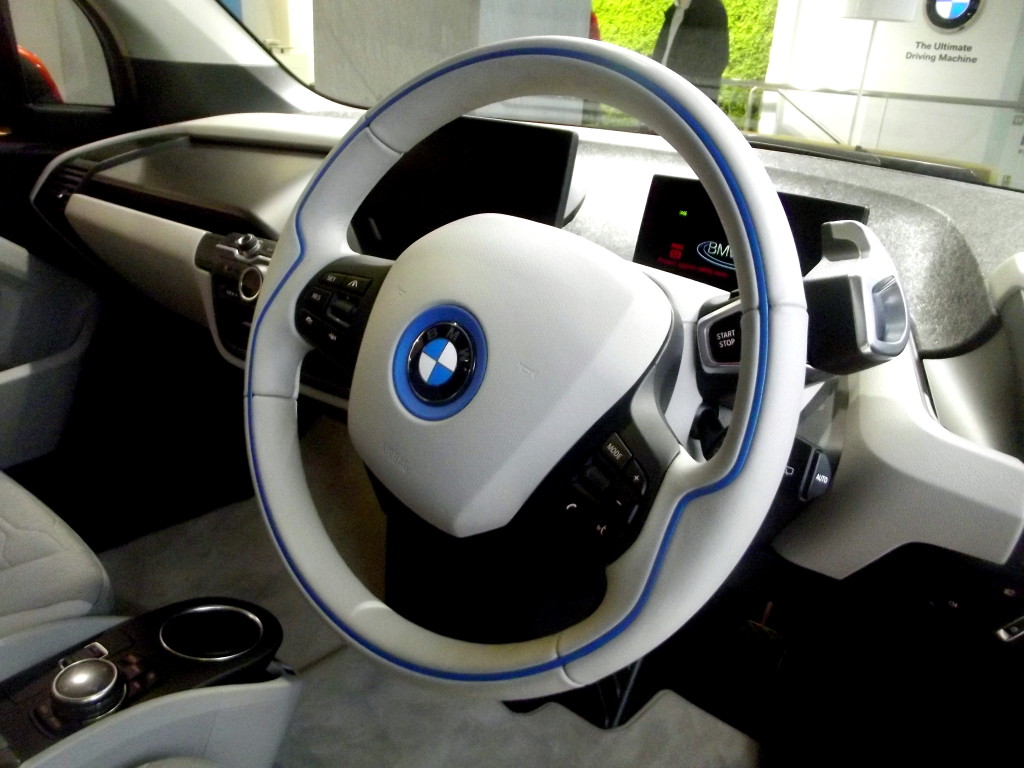 Playing on the car’s techy edge, it features a little monitor that has an integrated Satnav. Like a little box of gadgets, you can browse the internet, tweet and even gain stars on its ranking system based on your driving skills. The device is nifty to say the least. It’s a delightful convergence of the once clunky world of the front car seat and the well-connected world of the outside. A small direction pad near the gear stick allows for easy use.

Not as fast nor radical as it’s i8 cousin, the i3 drives much like David Beckham’s style; with a delightful effortless. It’s smooth, the low center of gravity conjured by the lightweight infrastructure enables the car to be driven with cursive ease. Even as a passenger you can feel how the car finely drifts along the fractured roads of London, a sense felt even off-road. It can pick up 30 to 50mph well and has a limited top speed of 93mph. You won’t exactly be driving that fast in London of all places, but the i3 feels nimble and swift in the city. The car can be driven with just one pedal, which can be difficult at first. Yet the myriad of aids, such as the Driver’s Assistant Package, mean the car is easily accessible to all yet the sheer customization on offer enables vehicle connoisseurs to revel.

“Simple and straightforward. And that’s it.” spoke James Lees, the Product Genius (whatever that means), at the bloggers event. The BMW i3 is what it is. It hopes to defy the unspoken rules in the Top Gear driven word of motoring by showing a skeptical petrol head fan base that EVs can be good. Whether it can replace Nissan’s Leaf family car is uncertain, but what is certain is that BMW have achieved what they set out to do. To create an innovative electric car.