Justin Timberlake is an American singer, songwriter and in most recent years, he’s focused on his acting career. He is most certainly a men’s style icon and I’m going to tell you why. From his early hip-hop years to his present day acting career and latest album which is an embodiment of his au courants.

The GQ Magazine covers really stands out as Justins’ most fashionable cover and also states that he is one of the men of the year and one of the top ten most fashionable men is America and Justin actually holds the top spot for that and I agree with them. 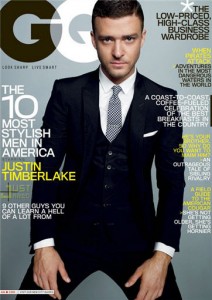 Justin Timberlake on the GQ Magazine cover featuring the 10 most stylish men.

Justin looks well groomed with a smart comb-over and a clean shave. He wears a dark blue suit with white shirt and a grey tie to give him a smart and sophisticated look.

He is looking very sultry with a narrowed eye pose. He’s wearing a blue blazer and white shirt unbuttoned at the top and a silver necklace. He has a short stubble and with a clean short back and sides haircut with the top being pushed up to create and very fashionable, up-to-date look. 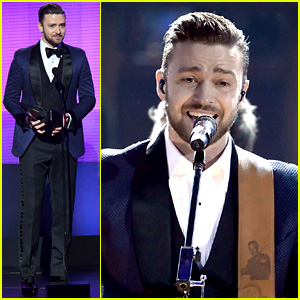 The picture on the right proves that he is an icon for men’s style no matter what situation. The left side of the picture is Justin picking up an award, he is wearing a dark blue blazer with black collaring matched with a black waistcoat, white shirt and black bow tie. He is also wearing black suit pants with a silk stripe patterning with black shoes. On the right side of the picture he is wearing the same outfit whilst performing (minus the bow tie). 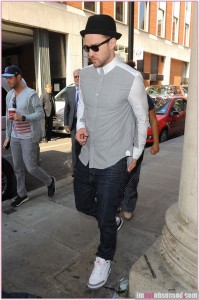 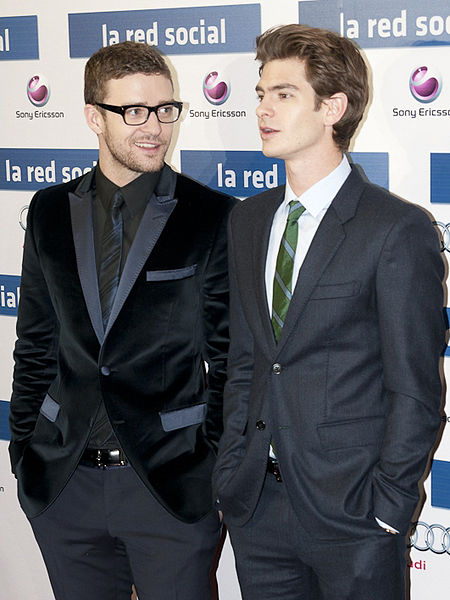 Justin suspended his musical endeavors and went to focus on his acting career, his first film was called Edison, this change from music to film, also brought changes to his style regime. His role in The Social Network changed it all..groomed hair and a simple stubble. A suede black jacket with blue trimmings, charcoal shirt, blue and black skinny tie. This outfit is simple yet elegant and extremely smart, the glasses bring an aura of intelligence and also look sophisticated.

Now, Justin looks better than ever.

Justin is suited and booted.

He is seen here wearing an all black suit, gingham black and white shirt, black tie and black & white smart shoes. He looks sculpted with perfect hair combed over to the left for that smart look and has a simple stubble that outlines his incredible facial features.

So, what do you think of Justin’s style transformations over the years? Pictures below prove Justin Timberlake is a man of style, elegance, sophistication and is a grooming god. His style is impeccable and he is a style inspiration, from his days in the 90’s with N-SYNC to now. As the times and fashion scene fluctuated, Justin was always a figurehead of style and fashion, I believe many men look up to him for inspiration, I am one of them.

The picture below sums Justin Timberlake as a style icon. No matter what he wears, no matter is he clean shaven or stubbly, no matter how his hair is styled, Justin is still a men’s fashion legend. Who knows, he probably wrote the book on men’s fashion, or at least took some tips from it. 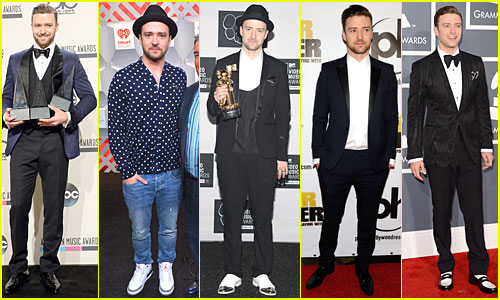 About the Author: Matthew Turner