The fashion world, as many long-term lodestars of the industry have known it to have been and always be, is changing. There has been a nearly stratospheric rise in showcases in the ranks of, what you could purport to say as, the satellite shows. In the fashion month carousel that pulls the couture voyeur to and for the different continents of the world, the youngling London Collections: Men, a mere 4 years old, and Pitti Uomo have all in recent years, grasped the attention of the blogger’s Instagram filtered lenses. The shows in these contemporary quills have bristled the rigid underbelly of what menswear has always typically ventured off into.

Whereas London Collections: Men seeks more to balloon interest in blossoming brands, the likes of Milan hold down the shimmering luminaries of the industry. Dior, Gucci and Prada to name a few, trickle into the forefront of the sparkling streets of the age-old city. Milan, held in the sophisticated powerhouse of Italy, a country where culture is interweaved with clothing in such a dream-like rapidity that the platonic plates themselves seemingly ship this heavenly romance. I mean, what else can we expect from a country quite literally shaped like a boot?

Interest in these guiding starlets may be fleeting, as the world becomes fascinated in wooden plank and Lego faced models sashaying down the concrete runways of London, but this does not mean that the talent is. Each season, Milan continues to flaunt its countless years of timeless aesthetics through collections inspired by heritage, classicism and luxury.

No introduction is necessary for the epitome of lavish luxury that is Gucci. Floating across the hoary, paneled flooring of the runway, the models’ nondescript faces and marbled cheekbones accented the monolithic stylisation of the collection. Having once been helmed by Tom Ford, the departure of Gucci’s creative director Frida Gianni was met with a chorus of controversy. Her well-known niches were softened, the post-Frida designs being ones of ethereal, scattered structures.

Loosely draped scarves, Vermillon silk cuffed shirts, billowing wide-legged trousers serving to willow out in flyaway strands the models’ silhouettes. The deep platter of rich teals, rusty reds, brick oranges and even flits of apricot painted an androgynous picture of fragile wrists peeking from painter coats. Leather sandals kept this faerie collection afloat, imparting a sense of elegance only Gucci, whoever its creative director may be, can muster.

What has pervaded into many strands of the fashion spectrum has been the blurring of men and women’s attire. The colder months are envisaged by Christian Pellizzari  to be a playground of flowing structures and wafty constraints, as elegance sways with each step from the model clothed in a striped, wool cape. The patchworks subsumes femininity, yet, retains a masculine architecture, as does the jacquard suits in both micro motifs and a vivid Navajo pattern, in textured wools. Urbanity was chiseled into the stoney palette via bomber jacekts, contrasting the fluent, oversized scarves.

Known for conceptual classcism, Emporio Armaini presented a collection with a Far Eastern flair. A soft construction of languid tailoring and military influences, forming the base of a refined and gentlemanly range. The Italian pantheon was greeted with a double-teamed horde of husky models, donned in carrot top and harem trousers, cashmere jersey jumpers and fitted jacekets in brassy hues.

Lenting insterest was achieved in Ermanno Scervino‘s manipulation of silhouette and outerwear: the two foundations of Winter fashion. Tarditional sartorialism was re-worked with textual differences and subtlety, Donegal tweed and furry wool not being the typical choice. Brawny tailoring of duffle and peacoats were paired with loose knits in subdued tones. Turtlenecks and crewnecks glossed with Nordic pints and stripes. Within this highly masculine ensebling, delicate embroidery added a lighter touch.

Stella Jean employed an avante-garde melange of Rajasthan-inspired colors and fabrics. Designers have been looking outside of the Western sphere of rigid suiting and gleaming the architectures from other cultures, flirting Indian and European designs. Having only pervaded the Milan streets back in 2013, Stella introduces temepred prints assembled onto Nehru-collared overcoat, knitted sweaters, elaborate outerwear, shawl collared blazers and joghpur trousers; elongating the silhouette. Patterned ankle-boots finished the experimental pattern clashing and embroidery.

Oversized cashmere jumpers and cardignas, loose-fitting, distending cashamere shirts, a luxurious and grungey take on the Kurt Cobain epoch of the nineties was the theme of Gaia Trussardi. Enveloping the models in supple fabrics, details in the likes of enlarged pockets and plush fur scarves signal a youthful, yet tragic rockability.

Nestled within the Milan Fashion Week schedule, was the agenda-changing Prada who, on Sunday, showcased a split gender narrative. A combined show, men and women wore uniformed assembles as they, rather than borrowed, they mirrored each-other. Commuter-esuqe macs were worn, a staple of both genders, with men donning Airport-steward styled suits in demure shades of restrained navy, grey and black.

As if inspired by E. L. James’ novel, 50 Shades of Grey, Italo Zucchelli, Calvin Klein’s creative director, drove a palatial collection of slate, dove, granite and charcoal assorted with monochrome. A strong focus on sharp, minimal tailoring, the crisp tones matched the equally crisp silhouettes projected by the models, who walked to a beat of elecronica. Snow leopard prints was clawed onto knit jackets and long jackets, the futurism of the colours flailed with archaic military influences of boots and double-breasted buttons. Bomber jackets and baseball hats and skinny trousers brought the chrome discolorations and simple detailing into the everyday.

Three words capture the decorum that paced down the gritty runway: suits, suits and suits. Corneliani captured the Italian essence of tailoring in a dark, somber way, with practical suiting attires. The minimalist aesthetic prevailed, with single and double-breasted blazers dressed with dapper sweaters underneath, percolating an unbridled level of sophistication. Belted trenches, a burgeoning motif in Milan this season, are matched with lavish plaids and holdalls in both leather can canvas materials.

The softer approach to menswear continued throughout Milan, with Neil Barrett opting for a muted and toned down collection of re-inspired classics. Masculine fabrics and knits are injected with Barretts iconic tailoring, a sharply structured, albeit fluid display of subdued colours, an organic palette of moss greens, grey-marl and sandstone. Knit-wear variations of traditional menswear staples – the jean and bomber jacket, tuxedo and Crombie coat – are scuttled into a collection studded with military influences. Knitwear, however, remains affrontly the most re-worked, with  trompe l’oeil cable knit prints and argylls engineered to flow around the body added a contemporary twist to these quintessential favorites.

Into the weeds without delay, as the musical goes. Ferragamo trekked out a woodland path, as poetic nymph models hovered down the runway. Romanticised ornithological bird prints swooped sown and nestled onto trench coats and jumpers, delicate dragonfly imagery and buffalo motifs was the verdant trifecta. Autumnal-hued trousers and crunchy, cosy oversized scarves matched the blocky checks that roosted on outerwear. Worn-down leather jackets mimicked the bark of trees, honing the serene forest of Ferragmo. 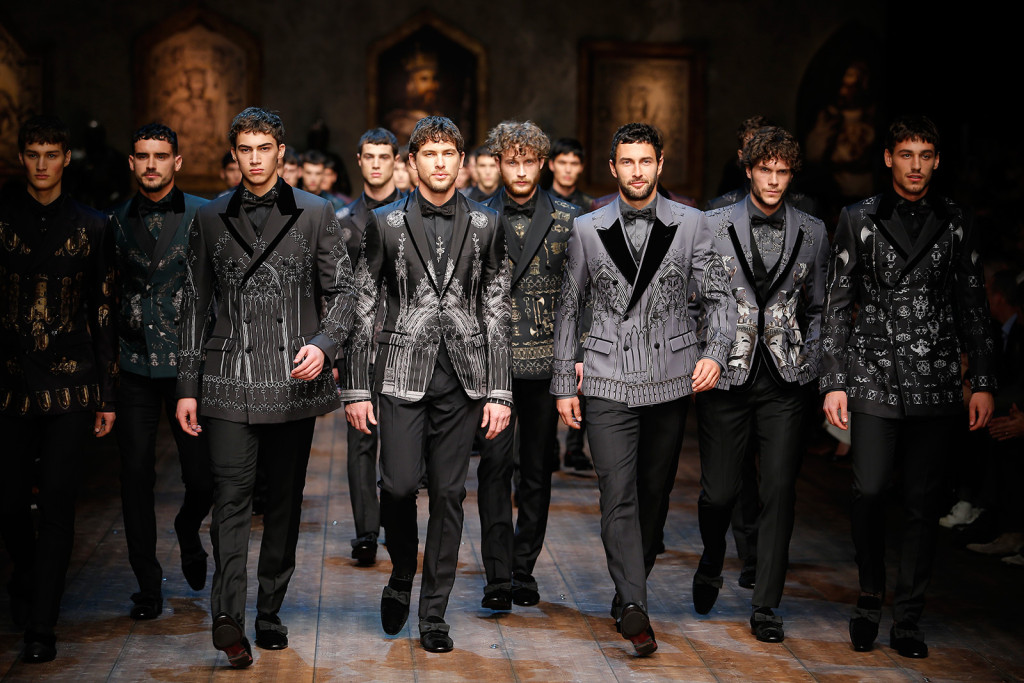 The house of Italian luxury that is, Dolce & Gabbana. Often embracing the exportation of cultures, the brand took to Nomadic, Sicilian inspired silhouettes to cultivate a rich and elegant showcase. After a season of ruby reds, sculpted, regal greys and deep blacks ensue, with royal prints embellished onto blazers. Portraits of monarchs and historical architectures complimented the metallic accessories that cherished the armors of chivalrous knights. You could definitely crown Dolce * Gabbana as the rightful Kings of Milan.

With slouching silhouettes and muffled colours, Marc Jacobs‘ vision is of men wrapping up in flowing garments that lengthen the frame. Generous trousers and outerwear was broken by heavy-duty boots. Fur and animal prints were daringly introduced to the demure aesthetic, with velvet tailoring and fiercely woven blankets enshrouding the lethargic model.

For his first venture into menswear as creative director of Jil Sander, Rodolfo Paglialunga set out an adventure into precisely cut tailoring imbued with relaxed sensibilities. Slouchy waffle knits that look as if they have come straight out of a men’s 50s/60s catalogue, oversized coats and trousers held from wafting outwards with belts, leaving thick-soled rubber boots  to form glossy puddled around the models’ feet.

Belted trenchcoats, oversized silhouettes, slouching knitwear and chunky checks appear to be the key trends of Milan Fashion Week. Creativity and being fashionable does not always have to be gluing lego and planks of wood to your face. Sometimes, as is always the case with style citadels like Milan, simplicity is the cornerstone of timeless, effortless elegance.