Tweed. Think of the sequentially British material, and what images flicker into your mind? Cold, crisp days in the moors up in the bristly British Northern Highlands. Gentlemen dandily dressed scurrying across the streets of Carnaby street, their brogue heels clapping against the cobblestone. To the contemporary street style aficionado, accoutering a three piece tweed suit as his scampers off, folio containing his 10 runway invites in hand.

As the glacial winter winds waft into the city, it calls for style mavens to ditch their flimsy linens and delicate cottons and go for something a little more heavy-duty. Materials that aim to insulate, rather than breathable weightlessness, are to be opted for instead. Materials like wool merino and seersucker are to be neatly tucked away for a few months, as the chill creeps in.

Going for a material that will add depth and character to your clothing in the colder months is easily achievable. Dressing seasonally adds longevity to your wardrobe, as pieces can be swapped in and out each season. Breaking out old favorites each month will bring excitement, and will even help on the wallet as staples begin to emerge and form in your closet. And if there’s one fabric that’s the staple of the menswear world, it’s tweed. 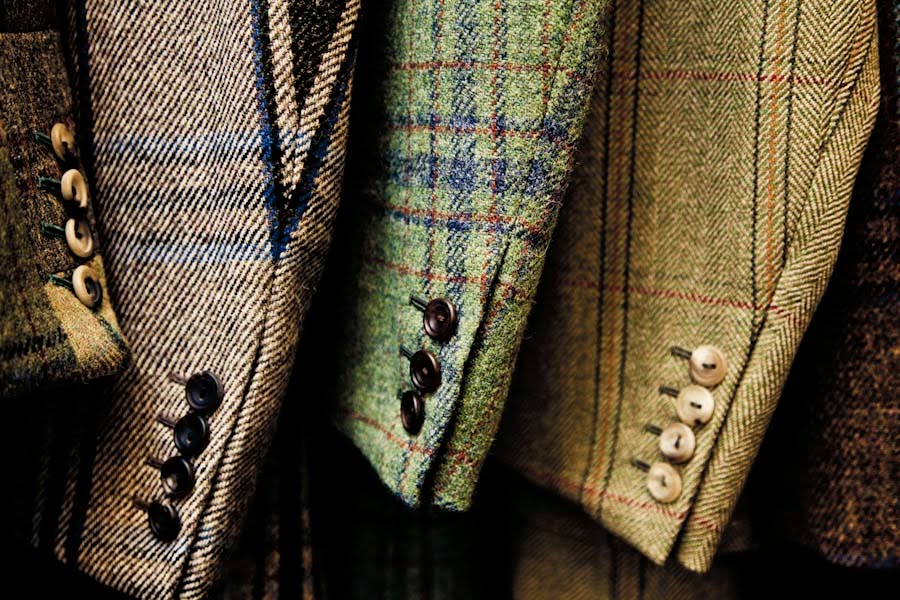 It’s not quite you might think it to be, tweed isn’t as stuffy and stody as college proffessors often make it out to be. Tweed is a rough, unfinished woolen fabric, in either plain or twill weave, and is often thought to have originated from the verdant lands of Scotland and Ireland. Initially woven by hand, it was a working man’s cloth, being durable, sturdy and thick, with its colours muted and earthy. It’s resistant to wind and water, making it a highly appropriate and trustworthy statements for the winter months.

The fabric became popularised among the Edwardian elite, as middle-class englishmen donned themselves in the rough fabric. The leisurely pursuits of the hoi polloi came to have a tweedy uniform, as in 1848, Prince Albert induced a rush on Scottish estates, with him acquiring quite the bounty of weave. The Balmoral Tweed, a blue material with white and crimson sprinkles, was his deisgn. Appearing a slate colour from afar, it resembled the granite mountains of Aberdeenshire as it was designed for deer stalking around the local area. This became one of the first kinds of Estate Tweeds, which saw different estates produce their own take on the hunting fabric.

It quickly evolved and became a performance fabrics, as the English Gentry began arraying themselves in tweed gear for their pastimes, whereas the Victorian middle classes mimicked the aristocracy, wearing their own tweed garments for their own jovial sporting endeavors, everything from tennis to mountain climbing. Yes, mountain climbing.

This multiplicity of tweed has given way to a new generation. Tweed was once split in two, with the more earthier shades being associated with the great outdoors, and the rocky greys being for business.

A Dickensian meets Alice In Wonderland twist to tweed was enacted by the surreal tailoring of Thom Browne. For his Autumn / Winter 2014/15 runway collection, Browne transferred the Scottish material into an idyllic, hoarily quaint Japanese garden. Hemlines were seamless, literally, as exposed hems created a ravaged aesthetic, complimenting the animalistic woodlander theme.

Raw edges were nipped on by the deer and rabbit that nestled atop headwear, leaving the tweed ensembles to perch on top of over-sized tweed trousers, shorts and kilts. The traditionally rigid and stocky dynamic of the suit was ripped apart by Thom Browne and his forest critters, showcasing how tweed has long since woken up from it conventionally bourgeois hibernation. 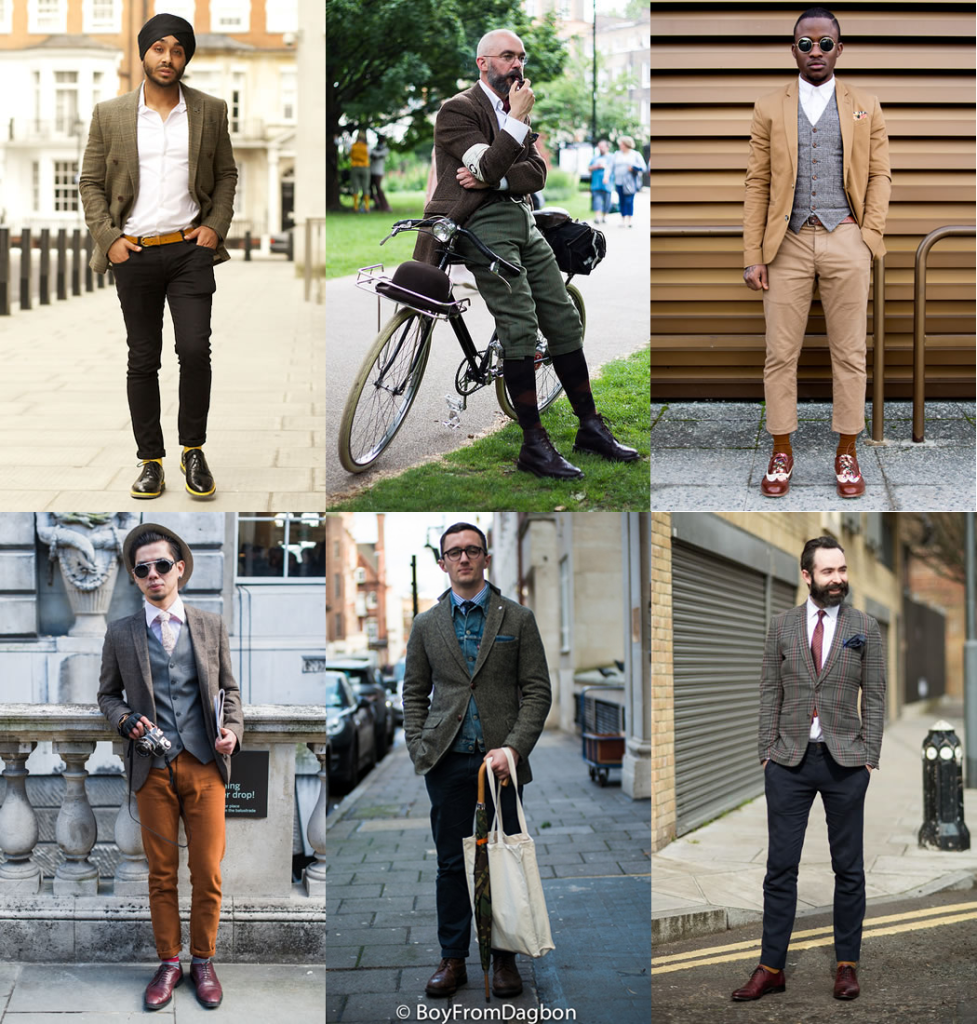 As you can see above, tweed is, in itself, a very versatile fabrics. Sartorially speaking, any piece of a three-piece tweed suit can be broken apart and seamlessly incorporated into an outfit.

A tweed blazer is the most effortless of the bunch. Ruggedly dapper, when working the tweed blazer as a separate, matching its sturdy structure with similar fabrics will create a playground of hard-wearing fabrics. Denim and corduroy layers will bring depth to the ensemble, pair with a softer material, such as chinos, to balance out the fabrics and finish off with Chelsea or Brogue boots to capitalise on the British Heritage look. Accessories such as a knitted tie will add further fabricated stylisations into the mix, with a silk pocket square injecting an unbridled sense of opulence that tweed has woven into every fiber.

Colours can be speckled across the body of the blazer, with windowpane check, houndstooth and Prince of Wales check being a small selection of the patterns that the blazer can be woven into. A complimenting waistcoat makes for a harmonious assemble. The finishing trousers can be worn, or for a distinctive swift in convention, selvage navy jeans are a safe, yet challenging alternative. A subdued white shirt, buttoned to the top in an ‘air tie’ style,

The lone tweed waistcoat is one not to be frowned or pitied upon. Instead, pity the gent who chooses not to wear the tweed waistcoat within their suits as a contrasting statement piece. A subtle one in that. Any colour of traditional tweed – tobacco brown, deep navy or slate grey – can be opted for, and all interchanged with one another. Invest in a suit of another fabric and the capsule sartorial wardrobe will be curated. The grey tweed waistcoat can be paired with the brown or the navy blazer, and vice versa, making the trifecta of hues interchangeable and completely protean.

Tweed trousers are a little aloof when compared to its fellow brawny brethren. The tweed material has been remodeled and reworked over recent years, making it comparatively less ‘stractchy’ and now softer and kinder to the skin. The tweed trouser is as all-rounded as the blazer and waistcoat. Pairing with a white tee and leather motorcycle jacket would break the stuffy traditions and ride in with a tamed rockability. A minimal turtle-neck jumper in a neutral tone will add to the level of refined sophistication. For the former, balmoral boots will clinch together the look, whilst with the former, a split toe or brogue will do.

A winter wardrobe is not all about safety, as one may assume. Simply throwing on a coat and hiding the abhorrent horrors of what lies underneath you will not do in today’s world. When communications are so fleeting, fashion and style is the world’s most efficient tool for communication, even if it’s a little bit cold outside.

Tweed is a fabric instrumental to the menswear market. Imbued with both gentlemanly charm, but also burly masculinity means that it is a highly translatable garment material. If worn with confidence, a tweed suit is a daringly refined ensemble that will fête you in compliments and admiration.